The air of excitement and energy as we entered the 100/6000 gathering in Dundee was almost tangible as people met for the first time or reconnected from across Scotland’s dementia communities and organisations.

Everyone was clearly excited and looking forward to the next two days at Scotland’s only conference conceived, developed and delivered by and for people living with dementia. Professionals, like me, are invited to take part as silent partners and encouraged to listen, observe and reflect as the discussions took place.

Right from the start it was clear that the real experts in the room – those living with dementia – meant business. Ron Coleman and his wife Karen founded the 100/6000 whilst reflecting during a Zoom meeting, with others like himself who live with a dementia, that if you had 100 people in a room living with dementia then that would equate to approximately 6000 years of skills, experience and life stories.  If that couldn’t solve problems then nothing would! 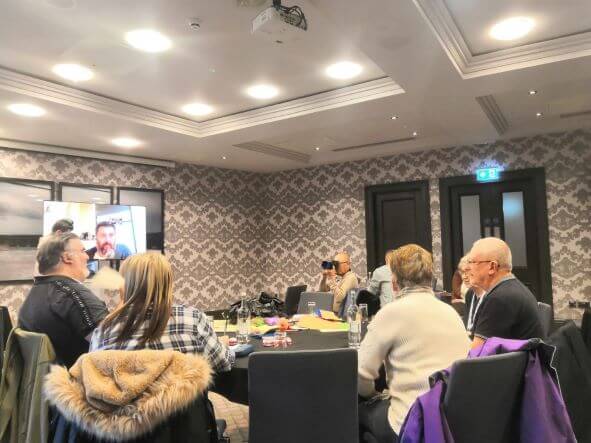 Ron Coleman pops in on Zoom to share his vision

Ron is a man of Herculean capability, infinite wisdom and warmth. His missing presence was felt by all on the first day but he Zoomed in from his hospital bed on the second morning and you could hear a pin drop inside the room as he shared his serious vision of us all working together as equal partners at the table with his usual smattering of sharp wit. I believe the first day would have lived up to his expectations and his peers and colleagues did him proud delivering their clear message with energy, drive and commitment to effect change that acknowledges that people living with dementia are and should always be equal partners wherever and whenever it’s about dementia. 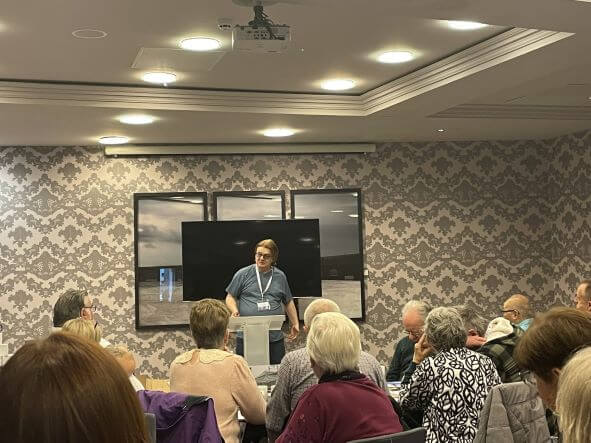 Howard Gordon is an articulate man with a vast knowledge of the policy landscape, the type of person that you happily listen to for as long as they choose to speak. He opened up with the theme of unconscious bias, how it’s all based on assumptions and that it should never ever be left unchallenged. We listened as professionals from tables as the back of the room as people shared their own experiences and I realised that I hadn’t ever quite considered dementia and unconscious bias in a context together. People spoke of: 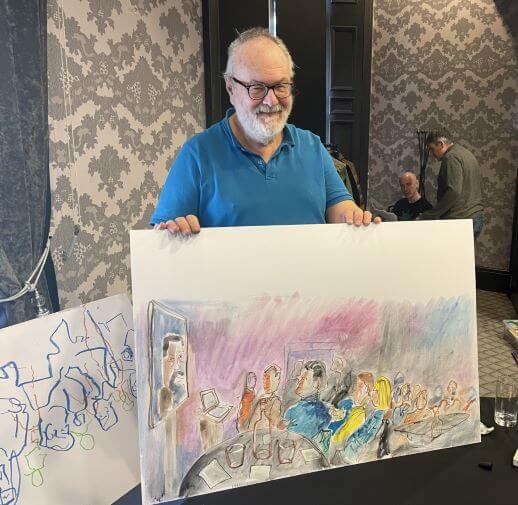 There was a strong agreeance across the round tables of a lack of understanding, support and of not being treated as an individual from others in the community, organisations, support services, or from friends. What hit me right between the eyes, was that unconscious bias happens often in your own home. How difficult it is to experience these views and opinions put on you by a label that assumes by definition that you are no longer a capable human being but what does that do to you when it comes from your own family?   They most likely have the very best intentions but are also affected by the very label and take over, speak for you, do for you and generally remove your freedom through overprotection.  There was much discussion about the very term ‘dementia’ and how we can’t get rid of it, that it carries such negative connotations across many cultures from thoughts of madness, the need for families to hide away and of it being some sort of karmic response to earlier behaviours in life and that people bring it on themselves. People spoke about the perceived ‘blanket issues’ of dementia that are dumped on to people and that they are no longer considered individuals with different experiences and capabilities.

Willy Gilder spoke of his struggles with the DVLA and his human right to be treated and as assessed as an individual with regard to his capacity for driving that ‘we should be treated as we are, not as people think we might be’.

James McKillop, a gentle man with many years of lived experience stood up to talk with his calm authority and unrushed manner as he drew us all in.  Affectionately known as ‘The Original Gangsta’ (coined by The Life Changes Trust), you know that when James has something to say that it’s going to be impactful.  He started by taking us back to 1906, thankfully explaining that he wasn’t there himself, and then went on to say that it wasn’t so long ago, just over 20 years or so, that a conference like this just wouldn’t have happened. That the very notion of it would not have been conceivable to professionals.  He spoke about someone called Heather, who back in 1999 invited him to talk alongside her at a conference. She believed from the early days that people living with dementia had worth, merit and capability to speak and advocate for themselves. They went on to found the Scottish Dementia Working Group together.  As James said, ‘Without Heather these types of conferences would never have happened.’ At that point the penny dropped. I realised he was talking about my very own Manager at the Edinburgh Centre for Research on the Experience of Dementia, Professor Heather Wilkinson.  I was filled with pride and a desire to emulate and continue the good work that she started back then, knowing all along that as professionals we are there to listen, learn and be pillars of support when desired so that people with lived experience of dementia can lead by themselves.

As I reflected on my own experience as a young adult caring for my Nana who lived with vascular dementia, I momentarily felt sad that I too had been exactly one of these family members inflicting my opinion on, taking over and doing for.  But then I realised that this is the very reason that life has led me to where I am. I have been given the opportunity, through my work as bold Scotland Project Manager and as Research Fellow within Edinburgh’s Centre for Research on the Experience of Dementia, to listen, learn, advocate and stand side by side with people living with dementia supporting them to take the power back for themselves and work together as equal partners so that we live in a Scotland where having a dementia doesn’t matter for who you are as a person or how you live your life.  That, as Karen said in her closing note, is so that ‘It’s not us empowering people, it’s allowing space for people to empower themselves.’

As Karen brought the conference to a close I was inspired for the forthcoming year, of being able to find the ways in which bold Scotland can support this vision going forwards and the part we play alongside the true experts, the Meeting Centres Network across Scotland and Age Scotland About Dementia working together holistically as equal partners of support.  One thing is for sure Ron’s vision of a joint organised gathering of minds and equal partners looks like next year’s hot date on Scotland’s landscape.