After nearly 50 years I’ve decided to go back to University. In my day we wore our hair long, bopped around to Slade and T Rex, and chanted ‘Maggie Thatcher, Milk Snatcher. I’ve got a feeling some things have changed.

I’ve been lucky enough to be given a Binks Scholarship by the University of Edinburgh. They say they want to attract people from under-represented groups, and I suspect very few people with Alzheimer’s have ever applied to do a Master’s Degree. The Binks Centre is developing new ways of research combining health and the arts – and I’m interested in looking at the whole question of dementia and creativity.

I know how important being creative has been to me in the 15 months since my diagnosis. I feel a burning urge to write and draw like never before – spurred on by the realisation that I have a terminal disease and my days are numbered. I’m pretty sure that creative activities help people living with dementia, but surprisingly little effort has ever been put into trying to discover what that really means.

I hope that I will be able to work in some non-traditional ways on this course. I would much rather make a video or a podcast than I would write an essay – but exactly what is going to be involved I’m still not entirely sure! I think it’s going to be fun finding out.

Some of Willy’s amazing art below: 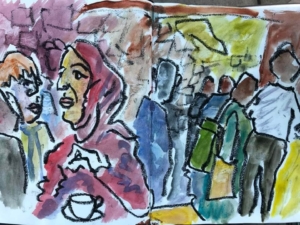 In the cafe with Elvis